Melias is a world of high fantasy, so there has got to be magic. I mean, what the hell are we all doing here if there isn’t magic in a fantasy world?

Many of the characters that dwell in Melias wield magic, so I figured, rather than pulling random spells outta my ass situationally depending on plot, I’d split all the magic spells in Melias into four groups: The Naturum, the Arcanum, the Etherium, and the Mysterium. An entry detailing all of these colleges would be long, boring, and dry. So I’ll do one at a time.

You see, each college’s name is a direct refection of the spell disciplines that each college has. Naturum focuses on spells that harness the raw power of Melias itself (the four elements) and at greater levels, a master of the Naturum college can command the intangible forces that govern Melias as well. Like slowing down time, or using the force of gravity to crush a heavily armored foe. 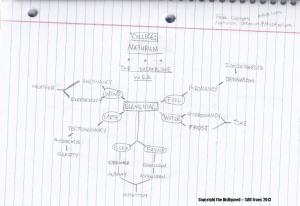 See? You got the college at the top, Naturum. Then, you have the Primal Source (where all the spells are ultimately drawn from) in a rectangle, and then the Energy Sources which are circled. The disciplines are where we’ll get into all the spells.

Spellcasters in Melias cannot just fling a fireball, or spit a curse. They must channel their focus deep into the primal source of the spell they want to cast and make it manifest into an Energy Source. For example, if I wanted to cast that aforementioned fireball, I would tap into the collective energy of ALL elements, and then make the fire materialize, often in my hand. Once materialized, I can recall the incantation verbally or in my mind (depending on my skill) and then let that fucker fly.

For those of you that are interested (that’s like…ALL of you), I’ll explain what kind of spells one can find in each discipline.

Ionikinesis- control and generate plasma, change its form to weaponize or fortify

Time– slow down time, speed it up, pause it, rewind it

Physiokensis- Controlling physics itself- slowing objects down, speeding them up, tearing them apart, pulling them together, moving them, throwing them

Electricity- projectiles, protection, arcing from one target to another

I think that does it for now. There’s three more colleges to talk about whether you like it or not, so strap on uh, I mean in and get ready to read, or to tell me to go fuck myself.