Creation of a new story means fresh concept art, something that I truly enjoy almost more than anything else involved within this process. I am working on a new story, just like I said, and it involves a new character, Modus (I posted about him earlier) and also a new villan, Ranin. He’s a vile, greedy, sadistic merchant who uses unholy magic and brute force to get whatever his heart desires. Miserly as well, Ranin keeps a close eye on his massive fortune and make sure he gets the most bang for his buck. Ranin is the one that murdered Modus and imprisoned his wife’s soul.

At present, he’s a spellcaster, mostly because he is too out of shape to do anything else. During the exaggerated gesticulations sometimes utilized for spellcasting, he will break a sweat, and often soak the front of his robes. He is impatient, and learned magic through dealing with the Infernals.

He is a cruel child with a machine gun. Wanna see? 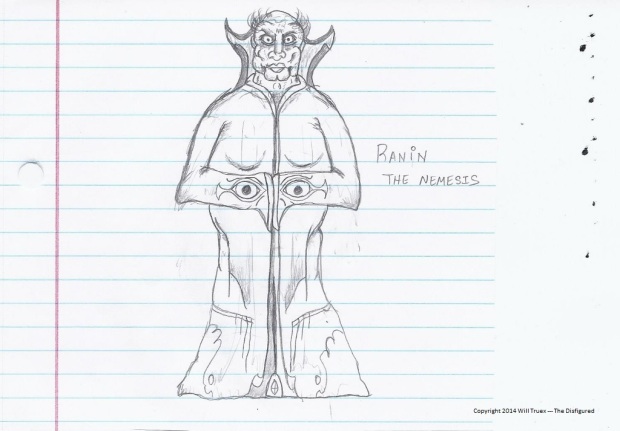 Sick little fucker, ain’t he? Modus also fights an Infernal in the beginning of this novella that calls itself “Eye.” A dangerous beast, it seeks to spread carnage and chaos by conjuring intense hurricanes and tornadoes wherever it may tread. It never fights fair- often attacking by stealth or ambush all while exacerbating the storm it conjured as it fights. Eye has a gullet filled with thin, razor sharp teeth, all crooked and twisted. Its breath is highly corrosive, and capable of breaking down almost any substance. Here’s a picture of Modus staring eye to eye with Eye: 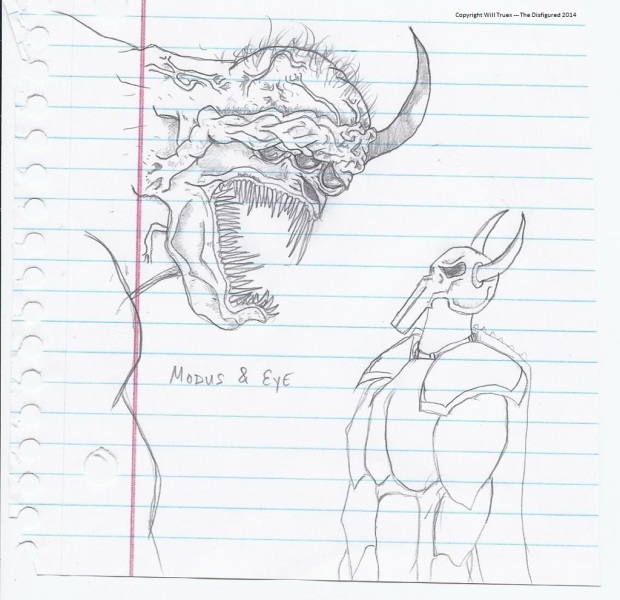 I also created a creature that I want to use in war scenes. It’s called a Salk:

Salks are strange creatures, able to think and feel along the same mental level as a horse. They are hearty, covered in dense muscle, thick hide, and coarse hair. It’s front legs are quadruple jointed in every joint, allowing a salk to articulate itself into almost any position to navigate any terrain. It uses its powerful hind legs and to leap from place to place on terrain that might not accommodate hooves, but have plenty of hand holds for their front legs. They are omnivores, eating just about anything that they can swallow whole. Its teeth are actually a defense mechanism- when it needs to clear the way, it lowers its teeth and uses them in a similar manner as the front end of a locomotive. They can be taught to attack enemies with gusto, using any and all parts of its body as a weapon.

Alright, that about does it. I’m currently busy and motivated, which is a pleasant change of pace to say the least.