Explaining why I’ve been lax in my activity would be boring and egotistical, so I’m going to jump right in and get to stuff people might actually wanna hear.

I’ve been working a lot of the 99 Cent Novella project, in particular focusing on two characters. One, a barbarian half-orc, and the other, a human Warrior Shaman. Anyway, I’ve been writing a novella where these two team up to smack the shit out of a powerful Infernal (picture evil, demon-like creature). Then, on a whim, I decided to get a little artsy fartsy and sketch Gruun’s face:

No nonsense motherfucker, right? Anyway, he and Thas (the Warrior Shaman) are fighting a being calling itself Sycahiss: a creature that not only has an unsettling appearance, but is also a master of decay, death, and necromancy. It is an Infernal that can tear a hole into our world through the agony and pain of those sacrificed in its name. Like a moth to the flame, the beast is drawn to such profound pain and misery, and when the veil finally pops, Sycahiss takes form as. Well…take a look:

See that little face inside its chest? This Infernal is not as powerful as one might think. Once Sycahiss is ready to enter the material plane, he latches on to a human infant (provided by its cultists) that he keeps inside of himself. Sycahiss draws from the life energy of the child, aging the human without it ever getting any bigger. When the child is used up, Sycahiss must find another, or he will not be able to maintain his corporeal form. Also, his cloak is just a load of bullshit. Here’s a piece of concept art that details one this vile creature’s many captives: 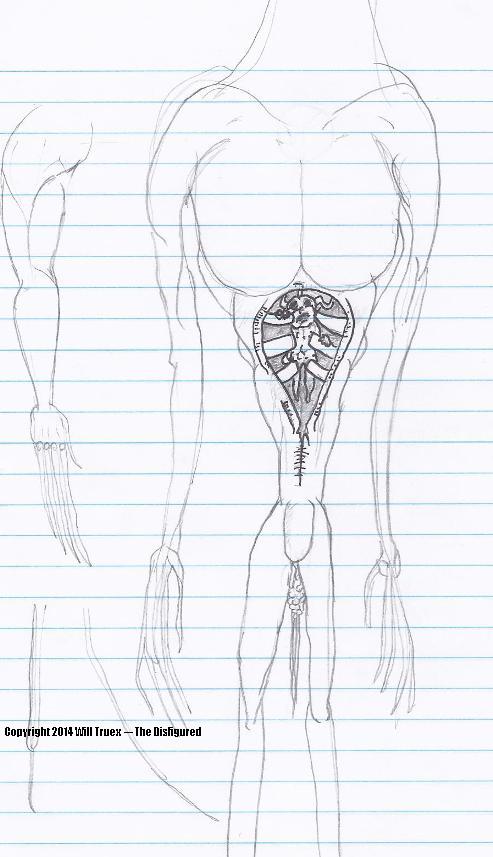 But that’s not all. Basically, Sycahiss is summoned upon a mass grave. Hundreds upon hundreds of people are tortured, killed, mutilated, and thrown into a large pit by his fanatic cultists, who will eventually add their own bodies to the pile. As Sycahiss emerges into the corporeal realm, he rises up out of the dead, and then rallies these unhallowed creatures to do his every command. Each one is different, but all are savage, mindless, and disease infested- all working as one via telepathic command from Sycahiss. Basically, this Infernal is a miserable and disgusting defiler, searching to spread misery and destroy lives, but unwilling to soil its own hands if unnecessary. Naturally, Thas and Gruun had to stand in its way.

Alright, I think that’s enough for now. I’d like to post some more about the races and creatures of Melias (the world where all my 99 Cent Novellas take place for now), describing what they are, and posting more concept art. I’ve been away from my craft for too long, and I aim to place my heart back where it belongs.

One thought on “Concept Art and MORE”